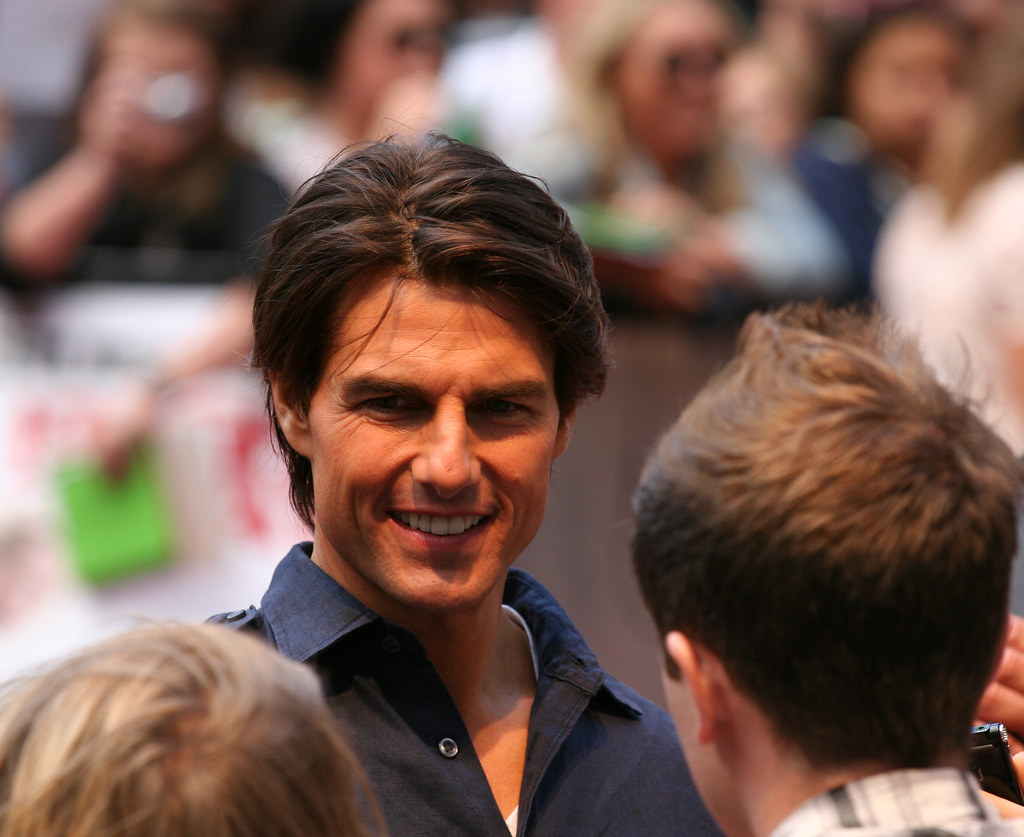 “Tom Cruise” by ian_fromblighty is licensed under CC BY 2.0

Tom Cruise is a very famous American actor and producer. The full name of Tom Cruise is Thomas Cruise Mapother IV, and he was born on July 3, 1962, in New York, USA. He is the son of teacher Mary Lee and an electrical engineer Thomas Cruise Mapother III. Cruise grew up in poverty, and he spent part of his childhood in Canada. With the net worth of $570 million, Tom Cruise is one of the highest-paid actors in the world. He made his film debut career with a minor role in an American romantic drama movie Endless Love (1981).

Tom cruise has started his career in the early 1980s and made his breakthrough with the leading role in an American comedy-drama movie Risky Business (1983) and an American action drama movie Top Gun (1986) as the first movie. At the age of 18, Tom Cruise moved to New York City to pursue his acting career. Tom Cruise has produced several films in which he even appeared.

Tom cruise has also produced various movies like Mission: Impossible, Mission: Impossible 2, The Last Samurai, Without Limits, The Others, Vanilla Sky, and many others. Some of the famous Tom Cruise movies are Tropic Thunder, Born on the Fourth of July, Mission Impossible- Rogue Nation, The Color of Money, Top Gun, The Outsiders, Taps, Interview with the Vampire, The Mummy, and many more.

Tom cruise has also received various awards, including three Golden Globe Awards and three nominations for Academy Awards. Cruise has the talent to do movies in every genre, including romance, comedy, drama, action, and teen. The 57-year-old superstar Tom Cruise has made more than 40 movies, and each is worth watching.

In this pandemic situation of the COVID-19 outbreak, stay home, stay safe, and watch some good movies during this time. Instead of going out and risking your life, why don’t you just stay indoors, grab a drink, end up on a cozy sofa with your family, friends, or partners, and enjoy your time watching movies of famous actor and producer Tom Cruise.

Ten Amazing movies of Tom Cruise you must watch

Jerry Maguire is an American romantic comedy sports film released in 1996. The producer and director of this movie are Cameron Crowe. The main casts of the movie “Jerry Maguire” are Tom Cruise, Cuba Goodling Jr., Jerry O’Connell, Kelly Preston, Renee Zelleweger, Jay Mohr, Regina King, and Bonnie Hunt. This movie is rated 7.3 out of 10.

Jerry Maguire is a 35-years old successful sports agent who is working for the Sports Management International. He has respect, his biggest clients, and a beautiful fianc?e. And one night, Jerry questions his purpose. He finally comes to terms with what is wrong with his life and his career. Jerry Maguire is fired for expressing his moral epiphany, and Jerry ends up losing his job and all of his clients. Jerry had a second thought about what he is doing in his life. Along the way, Jerry finds out about harsh truth. He then decides to put his new philosophy as an independent agent with the only person who stays with him and his accountant, former colleagues.

Jeol Goodson is a high school student who lives with his wealthy family in Chicago. When his family leaves on vacation, Jeol cuts loose with his best friend, Miles. Miles convinces him to take advantage of the freedom to have some fun. Jeol finds himself entertaining to Lana, the lady of the night, to whom he hires for the night of delight. lHe is looking for fun at home, but the situation quickly gets out of hand. To raise a lot of money, Jeol is so desperate that he turns the house into a brothel.

Rain Man is an American comedy-drama film released in 1988 and written by Barry Morrow and Ronald Bass. The director of this movie “Rain Man” is Barry Levinson. The casts of the movie are Dustin Hoffman, Tom Cruise, Valeria Golino, Gerald R.? Molen, Jack Murdock, Lucinda Jenny, Bonnie Hunt, Ralph Seymour, and Michael D. Roberts. This movie is rated 8.0 out of 10.

Charlie Babbitt is a young car dealer, who is in the middle of importing four Lamborghinis to Los Angeles for the resale. He needs to deliver the card to all those impatient buyers. Charlie returned to his home in Cincinnati when he learned about his father’s death. Charlie Babbitt found out that he has an autistic older brother named Raymond, and his father had left $3 million fortune to the mental institution where his brother Raymond lives. The two brothers returned to Los Angeles, and their trip ends up changing both of their lives.

Mission: Impossible ? Fallout is an American action spy movie released in 2018. The writer, producer, and director of this movie is Christopher McQuarrie, and this movie is the sixth installment of the movie series named Mission Impossible. The casts of the film “Mission Impossible- Fallout” are Tom Cruise, Henry Cavill, Simon Pegg, Rebecca Ferguson, Ving Rhames, Sean Harris, Angela Bassett, Michelle Monaghan, and Alec Baldwin. This movie is rated 7.7 out of 10.

The IMF agent, Ethan Hunt, is assigned to buy three plutonium cores in Berlin from the gangster of Eastern Europe before the Apostles can buy. Ethan Hunt and the IMF team join forces along with other familiar allies to prevent a disaster of epic proportions. John Lark and a group of terrorists called Apostles decide to use three plutonium cores for a nuclear attack on Saudi Arabia, Vatican, Mecca, and Jerusalem. Ethan and his IMF crew find themselves in a race against time when the weapons go missing, and the mission has gone wrong.

Minority Report is an American science-fiction action detective movie released in 2002. The director of this movie is Steven Spielberg. This movie is based on the short story named “The Minority Report” by Philip k. Dick. The casts of the film include Tom Cruise, Steve Harris, Colin Farrell, Samantha Morton, Neal McDonough, Kirk B.R. Woller, Max von Sydow, Richard Coca, Jessica Capshaw, and Lois Smith. This movie is rated 7.6 out of 10.

In Washington D.C., the murder has been virtually eliminated in the year 2054. To see the future and to predict the crimes, they use three gifted humans with special powers. John Anderton believes that the system’s flawlessness steadfastly. One day, pre-cogs predicted that John Anderton would commit the crime in the next 36 hours. Therefore, a special force unit can arrest the murderers before the crime is committed, and an officer himself of that special force unit is accused of murder in the future.

Collateral is an American action-thriller movie released in 2004. The producer and director of this movie are Michael Mann. The casts of the film “Collateral” are Tom Cruise, Jamie Foxx, Jada Pinkett Smith, Richard T. Jones, Barry Shabaka Henley, Klea Scott, Mark Ruffalo, Irma P. Hall, Peter Berg, and Bruce McGill. This movie is rated 7.5 out of 10.

Max Durocher is a cab driver from Los Angeles, US. He is earning enough to start up his own Business. He picks up a pretty lady named Annie as his fare, and after dropping her, he meets Vincent. After a long day, when the sharp-suited Vincent offers Max $600 to make five stops, the cab driver Max is about to knock off. This sounds good until the sharp-suited Vincent turns out to be a ruthless hitman, a contract killer. Vincent is killing people in every five stops. And each one of those five stops involves a hit. Max tries to get out of it, but Vincent keeps catching up to him. As the night goes, Max starts to wonder if he will be able to see the sunrise as the police and the FBI now hunt him and Vincent.

Born on the Fourth of July is an American biographical war drama movie released in 1989. This movie is based on the eponymous 1976 autobiography by Ron Kovic. The director of this movie is Oliver Stone, and Stone and Kovic wrote the film. The casts of the movie are Tom Cruise, Raymond J. Barry, Bryan Larkin, Kyra Sedgwick, Josh Evans, Anne Bobby, Sean Stone, Jerry Levine, and Willem Dafoe. This movie is rated 7.2 out of 10.

Ron Kovic is a young boy living in Long Island, New York. In the mid of 1960s, the New York teenager named Ron Kovic enlists in the Marines, fulfilling his patriotic duty. During his tour in Vietnam, Ron Kovic accidentally kills a fellow soldier in a retreat. Later he becomes permanently paralyzed during the Vietnam battle. He becomes a pro-human and anti-war rights political activist after he feels the betrayal by the country he fought in his life. When he returns home to people on both sides of the political divide and an uncaring Veterans Administration bureaucracy, Ron Kovic becomes a passionate critic of the Vietnam War.

The Color of Money is an American drama film released in 1986 and directed by Martin Scorsese. The movie is dependent on the novel of the same name, “The Color of Money” by Walter Tevis. The casts of the film are Paul Newman, Tom Cruise, Helen Shaver, Mary Elizabeth Mastrantonio, John Turturro, and Bill Cobbs. This movie is rated 7.0 out of 10.

“Fast” Eddie Felson is a former pool hustler, who is turned into a successful liquor salesman in Chicago, US. Eddie Felson decides that he want to return to the game by taking a pupil. He there meets a young, talented, and promising player named Vincent Lauria and proposes a partnership. Eddie teaches Vincent about the tricks of scamming, but later, he becomes frustrated with Vincent’s showboat antics. This leads to an argument among both of them. Eddie takes up playing the game again, where he soon crosses his paths with Vincent as his opponent.

A Few Good Men is an American legal drama movie released in 1992. The director of this movie, “A Few Good Men” is Rob Reiner. The movie casts are Tom Cruise, Jack Nicholson, Demi Moore as lead roles, while the supporting movie casts are Kevin Bacon, Kevin Pollak, James Marshall, J. T. Walsh, Christopher Guest, and Kiefer Sutherland. This movie is rated 7.7 out of 10.

Lt. Daniel Kaffee is a military lawyer who has never been inside a courtroom. In the courtroom, he defends Marines accused of murdering a colleague at the Guantanamo Bay Naval Base in Cuba. Daniel Kaffee is known for seeking plea bargains. The fellow lawyer, Lt. Cdr. JoAnne Galloway, convinces Kaffee that the marines were most likely carrying an order from a commanding officer. Daniel Kaffee takes a risk by calling Col. Nathan R. Jessep to stand to uncover the conspiracy. The Marines contend they were acting under orders.

The Top Gun Naval Fighter Weapons School is the place where the best of the best train to refine their elite flying skills. The students at the United States Navy’s elite fighter weapons school compete with one another to be best in the class. Maverick Mitchell is an expert Unites States Naval Aviator, and he is also a hotspot fighter pilot. He is sent to school, and his cocky demeanor and reckless attitude put him at odds along with his fellow pilots, especially the coolest one named Iceman. Maverick is competing to be the top fighter pilot and win the Top Gun Trophy, but he is also fighting to gain the attention of a beautiful flight instructor named Charlotte Blackwood.